Create an Account - Increase your productivity, customize your experience, and engage in information you care about.

The City of Garland’s Central Park was designated as a Lone Star Legacy Park by the Texas Recreation and Park Society at their 2013 state conference. A Lone Star Legacy Park is a park that holds special prominence in the local community and the state of Texas. These parks have endured the test of time and have become iconic to those who have visited, played and rested on their grounds. A designation as a Lone Star Legacy is one of the highest honors that can be bestowed on a park.

Central Park, also known as the "old Garland Park grounds," "Williams Park," and "City Park" when it became the first municipal park in Garland's park system, has been used as Garland's common green, park, recreational area and community space, private or public, for well more than a century.

In the spring of 1919, an early federal transcontinental highway route extending from Washington DC to San Diego was laid out over sections of existing local roads and passed the current Central Park site on two sides. A Texas Historical Commission marker commemorating the "Bankhead Highway in Garland" was installed along the route in 2011.

In 1926, D. Cecil Williams acquired the old Garland Park grounds, combined it with his family's adjacent creek side property and renamed it "Williams Park." Williams constructed a dam across the creek to form a natural swimming pool, which he proudly christened "Lake Garland." The Williams Park operation closed after the 1939 season.

Opening to the Public

Following World War II, the Garland Junior Chamber of Commerce, commonly known as the Jaycees, started fundraising for a Community Park. A proposed park acquisition was included by the council in the 1947 bond election, and in 1948 the City of Garland purchased the 50 acre tract from the Williams family. This tract became Garland's first municipal park and was the beginning of the city's park and recreation system.

The City leased several acres to the U.S. Air Force from 1958-2009, for a permanent Texas Air National Guard station. Central Park was the home of the Garland Civic Theater from 1969-1982.

Central Park has served Garland in many facets and is currently home to the Granger Recreation Center, South Garland Little League, Garland Pee Wee Football and the Garland Baseball Association. The Jaycees, whose work helped found the first municipal park in Garland, continue to support Central Park preservation and improvements. 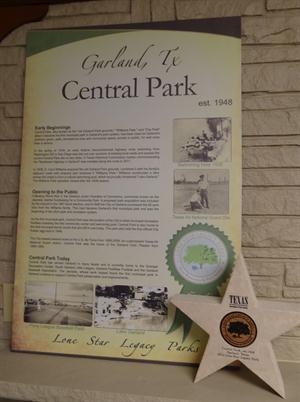